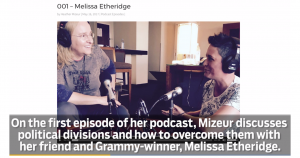 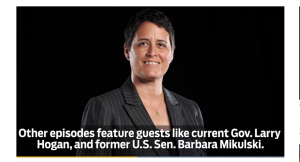 After Heather Mizeur lost the Democratic primary race for governor in 2014, she retreated to her farm on the Eastern Shore for more than two years, leaving behind a political life she had been building since she was a teenager.

Today, she’s re-emerging on the Maryland political scene with a new organization that has the goal of bridging the deep political divisions in society.

“My sense is that we are feeling worn down and there’s almost a desperation, no matter what side of the political divide you’re on,” Mizeur said. “We’re tired as a country of being at each other’s throats. And what’s the way out of it? I’m excited to offer at least my version of one long drink of water.”

In addition to a blog and planned training camps for women interested in civic engagement, Mizeur is launching a podcast by the same name, where she discusses political divisions and how to overcome them with rock musician Melissa Etheridge, a friend and mentor of Mizeur’s, with Republican Gov. Larry Hogan, and with former U.S. Sen. Barbara A. Mikulski.

“I told you back when we were both running for governor that we agree on a bunch more things than you would think,” Hogan tells Mizeur in one podcast episode.

The organization is meant to promote the same brand of political discourse that Mizeur used in her upstart bid for governor three years ago, including her refusal to speak negatively about an opponent. Although she finished a distant third in that race, she built a large network of dedicated supporters.

Now, Mizeur hopes those supporters and others will come to Soul Force Politics, funded in part by leftover campaign funds, as a way to learn how to “give us the clarity and the strength to have a conversation with someone who disagrees with you, and really rankles you.”

New to her brand of politics, however, is Mizeur’s belief that blending spirituality with politics is key to finding any central ground.

She said the discord that’s become apparent since President Donald Trump’s election inspired her to look for a way she could help be a “balm” to people on both sides of the aisle.

She said she does not plan to run for office again.

Although spirituality is central to Mizeur’s approach, she also focuses on the nonviolent protest message of Gandhi, the Rev. Martin Luther King Jr., Harriet Tubman and Nelson Mandela.

“It’s more about a shift in culture, and how we deal with each other,” she said.

In the first episode of her podcast, Mizeur discusses with Etheridge how the singer first introduced her to the concept that dividing people into camps of opposing points of view only reinforces opposition, and that spirituality can transcend that.

“There’s a belief — and it’s belief that holds things together — and it’s that belief of ‘us’ against ‘them,’ ” Etheridge says.

“I remember when you first started to talk about this, I gave you special dispensation: ‘Well, she’s my crazy rock-star friend,’ ” Mizeur said. “But more and more, it started to make sense to me.”

The women discuss how Mizeur helped Etheridge shape her views over their eight-year friendship, and how Etheridge counseled Mizeur through the devastation of losing her bid for governor by insisting there was a silver lining.

Both women, who consider themselves liberal progressives, were stunned that Trump beat Hillary Clinton, but more stunned at the anger and fear they say they saw among his supporters.

“There is a piece of me that is very thankful for what happened on that Election Day,” Mizeur said of the 2016 presidential race.

“I was very comfortable semiretired on my farm, feeling like I had contributed my pound of flesh to the public sphere, and I was happy living a private life,” she said. “And then after the election, I said, ‘Oh, goodness. There’s so much more work to be done. We can’t be on the sidelines.’ ”