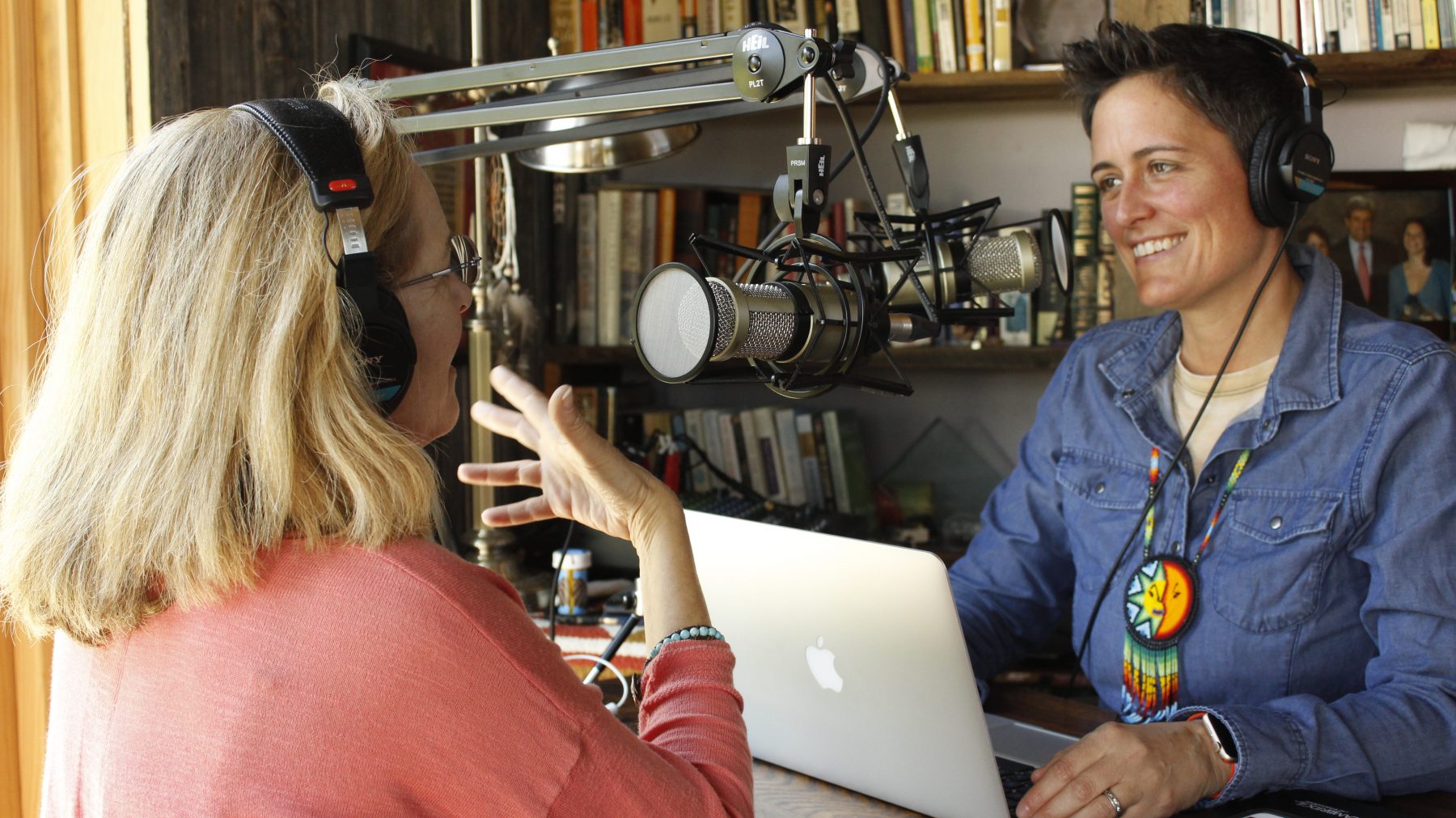 CHESTERTOWN — Heather Mizeur’s podcast studio is a room with a view that lends itself to the sort of soul-searching she elicits in conversations with her guests.

Located on Apotheosis Farm off state Route 213, just north of Chestertown, Mizeur’s studio is an idyllic cabin built of reclaimed wood, packed with books and situated next door to her wife Deborah’s apothecary. From her desk, Mizeur and her guests enjoy the view of the pool, which looks and functions a bit more like a natural pond, gardens, the farmhouse and woods lining the property.

“The land here is very magical,” Mizeur said in an interview about her new venture, MizMaryland: Soul Force Politics.

An effort aimed at connecting spirituality with politics to improve civic discourse and bring positive change to the state and beyond, Soul Force Politics launched this month with the podcast, a blog and a series of empowerment workshops on the calendar, including one to be held Nov. 7 at Washington College.

Mizeur believes our spirit connects us, that it is “the fire spark to our heart.”

Mizeur and her wife maintained a second home in Chestertown for a number of years — they spent their honeymoon here — while they worked on the western shore. Mizeur was a congressional aide — including time as then-Sen. John Kerry’s director of domestic policy.

She also is a politician in her own right. She was elected to the Takoma Park city council and served as a delegate in the General Assembly. She made a bid for governor in the 2014 race, losing in the Democratic primary.

Following the 2014 election, Mizeur semi-retired to Apotheosis Farm. But another election night — Nov. 8, 2016 — stirred in her the desire to get back off the sidelines.

She hoped to see the tenor of national discourse shift from the battle language of the presidential campaign trail to a message of unity as Donald Trump took the oath of office and formed his administration.

That change has not happened, and Mizeur came to a realization. There was more work to be done.

Her goal now is to reinvest a sense of spirituality into politics.

“(I) spent a lot of time thinking about what that was, though. Because normally, blending politics and spirituality comes with a warning label. And what I’m encouraging people to do is rethink that — that bringing our spiritual wisdom into our civic actions is what creates the profound change and shifts that we’re looking for,” Mizeur said.

Who better to be Mizeur’s first podcast guest than her spiritual mentor and longtime friend Melissa Etheridge — the Oscar- and Grammy-winning singer/songwriter. The pair first came in contact in 2007 during another presidential race.

Mizeur was a superdelegate not yet prepared to choose between Democratic contenders like Barack Obama and Hillary Clinton. Mizeur said she received calls from Obama, from the Clintons and from other party leaders like U.S. Sen. Dick Durbin who represents Mizeur’s home state of Illinois.

“And I only returned Melissa Etheridge’s call. It was the Obama campaign that had her call me and we started laughing. I said, ‘Well they found the secret path to having me return a call.’ And she said, ‘Yeah I read your bio and I had to laugh. They had the gay one call the gay one,’” Mizeur said.

The two had a lot in common, from their Midwestern upbringings to both having carried pocket-sized copies of the Constitution when they were in school. Their friendship grew.

“And along the way, she started dropping her wisdom about various spiritual practices and traditions that she had come into contact with that expanded my own relationship to spirit beyond my own Catholic upbringing, which I am still dedicated to. I’m just Catholic-plus,” Mizeur said.

Etheridge was thrilled to be Mizeur’s first guest.

“We have a deep friendship that was built on a mutual love of politics that morphed into a beautiful spiritual partnership. It makes so much sense that this is the next phase of what Heather is bringing into the world. We need a leader that shows us how to blend politics and spirituality. What a gift,” Etheridge said in a statement announcing the launch of Soul Force Politics. 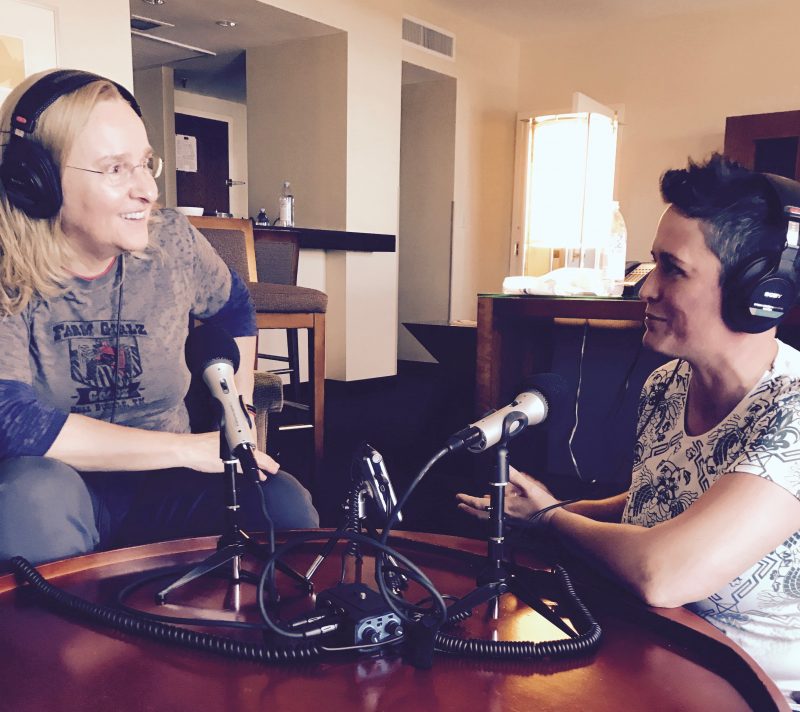 Next in the lineup was retired U.S. Sen. Barbara Mikulski.

“It’s the first podcast she’s ever recorded and she’s very excited about it and it comes through in the podcast,” Mizeur said.
Mizeur and Mikulski discuss the former senator’s spirituality and Catholic upbringing, what it was to be the first woman elected to the Senate in her own right and even the time NASA named a supernova after her.

“But I also prompt her to talk in detail about her bipartisan relationships and how she got things done by cooperating across the aisle,” Mizeur said.

Mizeur reached across the aisle herself for Republican Gov. Larry Hogan’s appearance.

“I’m very serious about this being a nonpartisan, non-ideologically driven approach to shifting the dialogue. And he and I show how you can have an hour-long conversation and find more areas of agreement than disagreement. And when we do disagree, we can do it without being disagreeable,” she said.

Mizeur thinks she was able to land Hogan as a guest, when many others have not, because he respected how she ran her campaign and how she has imbued those sensibilities into Soul Force Politics.

“I didn’t sling mud during the primary,” Mizeur said. “That’s my approach to politics. You should be for something, not against someone. And this organization is a reflection of that. And about bringing those values into our everyday dialogue, into our consciousness and trying to reform and reshape the way that we choose to engage in the political sphere.”

Soul Force Politics is much more than a podcast. It is a spiritual and political movement.

Mizeur is hosting a series of empowerment programs throughout the state: “Discover Your Inner Wonder Woman.”

“I don’t know any women who went to see the ‘Wonder Woman’ movie and didn’t come out of it feeling really super-empowered and excited. And I deconstruct in this workshop the archetype of the successful warrior woman presented in this film as a way to share guideposts for how to live with that empowerment in your life every day,” Mizeur said.

She and her wife plan to donate 8 acres of Apotheosis Farm to create Camp MizMaryland. Mizeur proposes to hold retreats on “highly skilled leadership, nonviolent resistance, peaceful protest, successful social engagement and connection to the land in the traditions of indigenous practices that honor that spirit that is moving through everything.”

“Because when we raise our awareness of the spirit that exists around us in nature is when we become more in contact with our own spirit as well,” she said.

And while Mizeur’s blog includes a policy proposal for statewide community service, it also has an entry listing her favorite recipes for farm-fresh eggs.

The podcast is already drawing an international audience, with Mizeur saying she received comments from listeners in Europe.

“That’s the beauty of technology like a podcast. You get uploaded on iTunes and people can subscribe to you all over the world, so your message can go wherever it needs to go,” she said.

Mizeur’s workshop, “Discover Your Inner Wonder Woman,” is being held from 6 to 8 p.m. Monday, Nov. 7 in the Litrenta Lecture Hall at the Toll Science Center at Washington College. Those interested in attending can sign up online at soulforcepolitics.org/event/wonder-woman-workshop-eastern-shore.